The major idea of Giorgi Gogiberidze’s art project is to visually present in video format the changes which occurred during past decades – both for the generation of Batumi residents who do not remember old Batumi and those who remember it. Video art is based on presentation of DOUBLE scene of several interesting films shot in Batumi. In One frame it is featured – footage from films shot in Batumi city and Video representing current situation of that location. The part of Batumi’s cultural heritage is closely connected to film heritage. Batumi a long history of cinema where film screenings were started by end of 19th century and later it became one of the popular locations for shooting various films. The modernization of the city changed many things – Many film locations were destroyed or were changed time after time.

The aim of this art-project is in fact to revive the old history and present the same scene/location (from various films) in two formats – the old version (during film shootings) and how it looks these days. It will be interesting comparison – showing how the city was developing and changing its urban structure. At the same time this is well connected with the future imagination of how Batumi city can be developed – continuation of eclectic constructions or focus on preservation of cultural heritage, historic part and positioning Batumi as art, cultural center, to show indirectly the excellent potential of BATUMI city – to be a center for film shootings, art projects etc.

Film shooting is taking place in modern times too – several interesting films were shot in last decade (Georgian and some International film directors), there is an international film festival BIAFF in city, local Georgian ministry of culture is promoting Adjara region / Batumi city as a shooting location etc. Accordingly, if more and more films will be shoot in Batumi (and film makers main interest as location is – combination of sea, water, old city, cultural-historical buildings etc.) – more chance somehow to convince the city & local government that art/cultural development can bring more benefits to city. 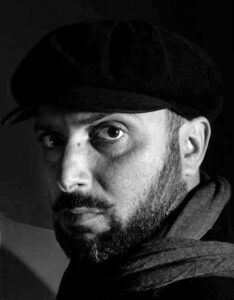 Painter, director, photographer and screen writer Giorgi Gogiberidze was born on the 31st of August 1974 in Batumi. He studied painting and design at Fine Art Institute . Later graduated from the University of Art, faculty of film and television directing. He worked as specialist of art at the Ministry of Culture, as lecturer of film directing and producing at the University of Art (2015-2018).
In 2006, Giorgi founded Batumi International Art-House Film Festival and is holding position of Director till present. Since 2014, he is an author of TV program “White Quadrat” dedicated to cinematography and acts as program director and speaker of program. Giorgi is a member of Georgian Film Academy. His filmography includes up to 20 promo videos (including BIAFF film festival promos) and several short films. Giorgi is also active in photography. He had photo exhibitions both in Georgia, Ukraine and Europe.