Coordinate 41 – the name of performance refers to the location of BATUMI city (its longitude and latitude on map). The name creates connection to seaside city BATUMI – the city where the artist Levan Tsulukidze was born, lives and creates art, music, arranges performances etc.

Batumi and the sea are important parts of his artistic works (be it music, graphics/paintings etc.).

The performance took place on a motorboat. Levan (and shooting team) went near the Batumi Cargo Seaport where OIL Metal Reservoirs are placed. With the background of this reservoirs & Batumi city – he performed his music poetry performance accompanied with the music (created by him). The main concept of the performance was evolved around the urbanization topic – in the area where Levan lives: There you can find the Batumi Oil Terminal with its big metallic oil reservoirs which are deeply reflected in his childhood memories. This oil terminal is in fact located in the city which is one of the major touristic city (sea tourism etc.) rich with its cultural heritage too. The oil Terminal at one point is important business providing work places but on the other hand also is in dissonance with the future development of the city (tourism, ecology, etc.) and there were some discussions going on in the city community around this issue (in the past there has been also a case of fire in the oil terminal). In the artist’s perception, somehow all these is reflected and he shows this concerns about industrialization etc. 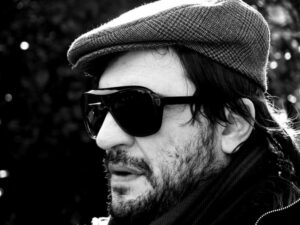 Levan Tsulukidze was born in Batumi (Georgia) in 1969. He attended University in Tbilisi in 1993. Levan was fascinated and interested in various art forms since childhood. Although he has no official education in Painting, he started to present himself in art with his paintings. His first exhibition was in 1994 in Batumi – Group exhibition ‘NEW GENERATION” of Batumi based artists.  In parallel to painting, Levan started his own music program in local Radio. Later he continued work at Ajara TV too, where he created various video arts.

In late 90’s Levan moved to Tbilisi where he continued work in art sphere (Paintings, music etc.).  In 2004 he returned in Batumi and together with his friends / musicians he formed Music band (rock/industrial) – NIJARA, which held various concerts, and musical / poetic performances related to ongoing challenges and problematics of city life. He founded Music Festival “NEW WAVE” which presented to audience alternative, indie music bands and was contributing to developing alternative music culture in Batumi (and in Georgia in general. In 2006, Levan created Music Composition (kind of revolution hit) – “Revolution – Batumi heartbeat” dedicated to 2 year anniversary of demolition of autocratic regime in Ajara region. This song became very popular.

In 2008, Levan gradually was interested in animation and independently learned animation creating / video editing and started to create Vide arts / Animations based on music composed by him.  These animations were show on TV, presented on various festivals and performances.   Meanwhile, Levan created two new musical projects – alternative/punk Bands – SANDINO  and GAGARIN 16- and was organizing concerts, performances etc.

Levan had several exhibitions in Batumi and Tbilisi in recent years. He was a part of  group exhibition of Georgian artists “Alternative Walls” in Italy (2018). One of his recent performance was held at Batumi contemporary center – “Batumi BEAT – urbanization and litter-bin” , dedicated to changing urban landscape of a city. He will have his personal exhibition in Geneve (Switzerland), which is postponed due to pandemic situation to 2021.