The major idea of Shota Gujabize’s art project is to present, by means of PHOTOGRAPHY, the changes which occurred during past decades – both for the generation of Batumi residents who do not remember old Batumi and those who remember it. The part of Batumi’s cultural heritage is closely connected to film heritage. Batumi a long history of cinema where film screenings were started by end of 19th century and later it became one of the popular locations for shooting various films. Many film locations were destroyed or were changed time after time.

The aim of this PHOTO art-project is to revive the old history and present the same scene/location/building (from various films shot in Batumi) in two formats within ONE Photo – the old version taken from a FILM (with several frame/photos in a FILM stripe) and photo showing the current situation of same location/building. It will be interesting comparison – showing how the city was developing and changing its urban structure. This Photo-project at the same well connected with the future imagination of how Batumi city can be developed – continuation of eclectic constructions or focus on preservation of cultural heritage, historic part and positioning Batumi as art, cultural center, to show indirectly the excellent potential of BATUMI city – to be a center for film shootings, art projects etc.

Film shooting is taking place in modern times too – several interesting films were shot in last decade (Georgian and some International film directors), there is an international film festival BIAFF in city, local Georgian ministry of culture is promoting Adjara region / Batum city as a shooting location etc. Accordingly, if more and more films will be shoot in Batumi (and film makers main interest as location is – combination of sea, water, old city, cultural-historical buildings etc.) – more chance somehow to convince the city & local government that art/cultural development can bring more benefits to city. 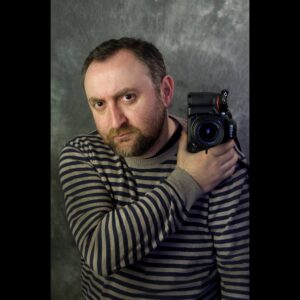 His creative life as he mentions starts when he began publishing letters in newspapers during school period. he  was obsessed by photography from childhood and makes photos till nowadays. He had many exhibitions, both group and personal, both in Georgia and abroad. In 2011, together with Giorgi Gogiberidze made a photo project, “Color of Winter” which was presented both in Georgia and abroad (Poland, Ukraine etc.). It happens frequently that he finds an unknown fact, photos or even an archive and then he thinks about and creates the form in which he can make it public, through an exhibition or a documentary film.

Shota made several dozen documentaries, mostly based on facts unknown to the public. He is the author of the projects (series of doc films)  – “One Hundred Years Later”, “House in Batumi” and others, which were broadcasted on AJARA TV (regional public broadcaster). He has shoot also several short films. One of the recent short film was shoot under the project “Batumi Wave” – group project of 10 Batumi based film makers which was focusing around BATUMI CITY thematic, and it was premiered at BIAFF Batumi Film Festival.

In 2013, Shota’s articles about OLD BATUMI were published in the newspaper “Batumelebi”. Later it was issued as a book. He was involved also in several other books mainly related to city history etc. It can be said that if any project is developed in Georgia regarding old Batumi, it always involves Shota.    He is also a photo collector of old photos of  Batumi and Georgia in general.  And one of his long term (and maybe never-ending) project is – to make the photos of  Batumi city places  which are depicted on old

Shota Gujabidze is also city activist and  a defender of the cultural heritage of old Batumi, which is having a hard days today. He constantly takes part in public activities, rallies and demonstrations.

Shota is member of several organizations focusing on cultural monument protection (including ICOMOS). He is co-founder of organization “BATOMI” which is working on topics related to cultural heritage protection.