”We cant visually show you what we did
This you must picture
We have been walking back and forward the harbor for some time now
We were borrowing the idea of the flaneur
Walter Benjamin said
The Flaneur is an amateur detective and explorer of the city.
It is an ambivalent figure of urban affluence and modernity.
Representing the ability to wander
Detached from society.
With no other purpose than to be an acute observer of industrialized,
and contemporary life.”

(Excerpt from the film ”Port as in Portal”)

“My work took flight from our initial meetings and talks within the group, and the method of silent walks that we took together of getting to know the sites. To be in physical motion when you work is rather new to me and felt intriguing and useful to further explore within this project. Water is always in motion, the city, us.

Repetion is also something that I find interesting as a method. Maybe it is because of my theatre background where you rehearse and repeat a lot, but also the everyday life jours that you have to perform over and over again. Repetition also inhabits something radical in a way. To repeat, to do something over and over again is often looked down at as something mundane or lazy. It challenges capitalism values of production, speed and expansion that take up so much time and energy of our short lives. So I chose a walk that I repeated a long the harbor, from Slussen to Danvikstull, several times on different occasions, often after each other. But I also wanted to ad things to challenge my views and perspectives on things since this was something we had discussed. What happen if I walk backwards or really slow? What if the camera is my eye or the notebook? What if I just walk and later on write down memories of what I saw, felt or thought of? What if I stop and talk with someone a long the way? What if I only register the sounds and imitate with my body how they ”move”?

This path that I walked inhabits many aspects of a postindustrial milieu. It is like walking in a passage of history and expansion next to each other. Demolishing and expansion is a brutal and loud force during some parts of the walk, then suddenly almost silence and you notice the smell of the sea, the sound of birds and ferries passing by. Some days the path is a blow hole and others extremely busy. You also see the historic buildings, mountain walls, the water and old ships silently hover over all of this and you feel kind of small and powerless on the one hand, and in awe on the other.

You try to melt all the co existing elements of this experience. I wanted to share my interpretations and since the walks are ephemeral by their nature, I chose to make something more material- a film, were I gathered all the fragments and documents from these walks and created a script read by a computer generated voice connected to sound waves. I was inspired by lecture performances as a format, but in this version the live part (the walks) had already took place and the lecture was pre-recorded. The non human element of the AI added a further perspective on the scenes that I registered, disconnected from my own persona that I also liked. The film Port as in Portal was then installed in the Wallright Buildings workspace as a 3:23 min loop during the whole day. I also performed backward walks with the audience so they could briefly try to tune in the environment on a different way and share their experiences with each-other.” 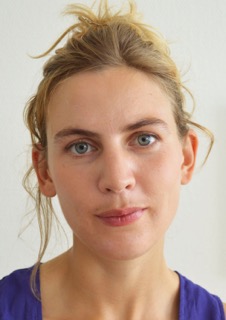 Sofia Romberg (FIN.87) has a Bachelor from Stockholm Academy of Dramatic arts in Set Design. She has been freelancing in different collaborations since then and worked for institutions like Riksteatern, Uppsala Stadsteater, MDT and Inkonst.
She enjoys mixing genres and to re- and mis-use things already there; digital archives, found objects and stories.
She has just attended the 5-year program at the Royal Academy of Fine Arts in Stockholm.